The century-old Virgin Mary Church in the central Anatolian province of Kayseri is being turned into a library by the municipality.

Dating back to the Ottoman era, the church is currently undergoing restorations after having served as a police station and sports center for long years. The decorations, frescoes and inscriptions under the plaster have been revealed during detailed work. The church will serve as a city library.

The library, which is set to be finished by the end of the year and will be open 24 hours a day, will serve in various languages in classical and digital terms.

“This is the first example in Turkey that an old religious structure will serve as a library. We will restore the structure to its original. A project has been made and it will turn into a library. There will be a culture café, electronic books and books for visually impaired people. We will make the best of technology. It will be a modern library. The cost is over 6 million [Turkish] Liras. I believe it will be about 8 million liras with books and other equipment,” Kayseri Metropolitan Mayor Mustafa Çelik said.

“The Virgin Mary Church functioned as a sanctuary until World War I. Then, it had various functions under different owners Recently, it was used by the Youth and Sports Ministry. We took it from the ministry for 25 years and needed to preserve it. People should come and see this structure. We thought about how to preserve it without changing its character. We decided to make Turkey’s most developed research library,” said Çelik, speaking of the church.

“There is a field of 1,400 square meters to be used physically. Along with a classical librarye-books and Internet, there will also be a café in the garden. It will be an international and distinctive library,” added the mayor, saying it would be a nice, aesthetic and functional library.

The field of the Virgin Mary (Surp Asdvadzadzin) Church had been known as the Emir Sultan neighborhood until the beginning of the 20th century. Today, the church is located in the field, known as Kiçikapı and Cumhuriyet neighborhood, which is a central location.

Sources do not indicate the date of its construction but it is stated that the church was built in the 1800s with the contributions of Hacı Garabed Zartaryan.

The church had functioned until World War I and then served as a depot, municipality and police station. It was assigned to the Youth and Sports Ministry in 1961.

Used as a sports center, the structure had been neglected and handed over to the Kayseri Municipality with a protocol in 2012 for 25 years. The church has an area of 915 square meters with three naves and basilica. There is a baptistery in the northeast part of the church.

Within the scope of the library project, the structure will remain like its original. All unoriginal and additional materials in the church were removed from the structure. 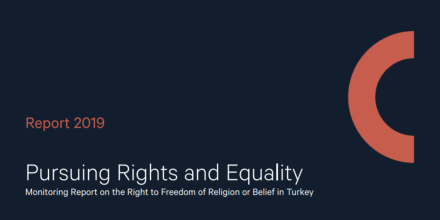 2019 Report Pursuing Rights and Equality: Monitoring Report on the…

Subscribe to our newsletter to get the new updates!